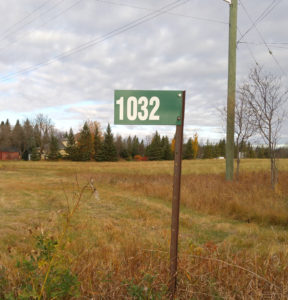 In 2012, the RM of St. Clements decided to install civic address signs at no cost to homeowners for all homes in the municipality. They adopted the provincial signage standard developed to improve 911 emergency service by making location signage provincially consistent for emergency dispatchers and to help emergency responders find locations more easily

The original plan was to have all the civic address signage installed within three years but due to the size on the municipality, as of 2017, this project is still ongoing.

The civic address signs have been installed in the following areas:

Priority for installation was given to areas with higher density populations, areas suggested by emergency services personnel, and by community interest.

As outlined in By-law 4-2012, the RM has committed to pay for and maintain the signage as public property. Property owners who have purchased and installed their own civic address signs that comply with the by-law specifications will receive a $25 rebate on their property tax bill. The decision on whether a civic address sign conforms to the by-law specs will be made when signs are being installed in the area.